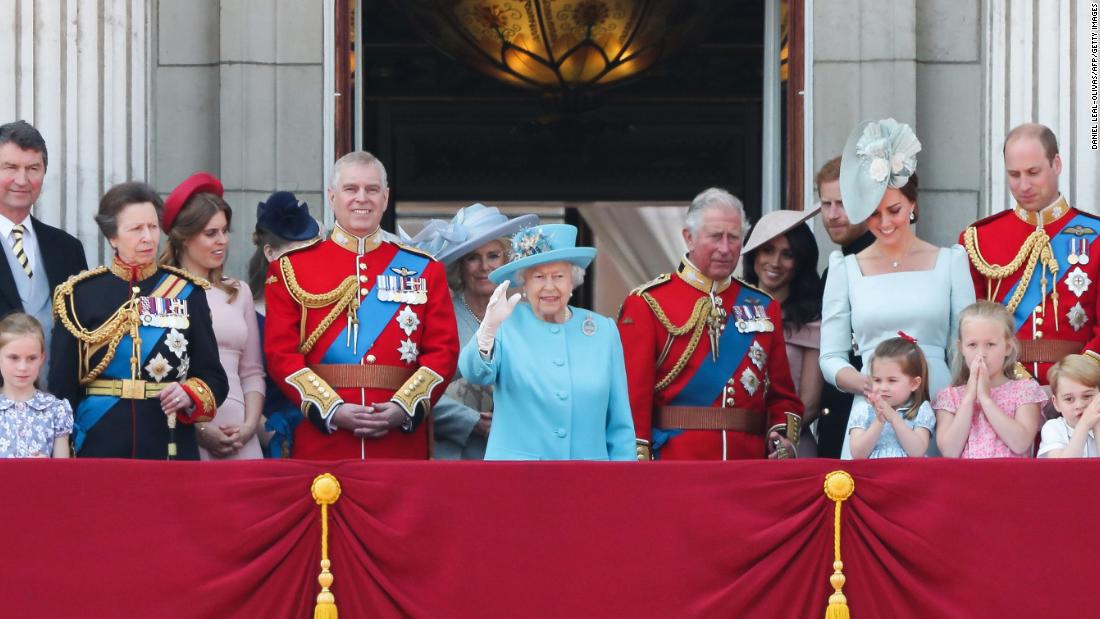 But the biggest news surrounds three notable omissions — Prince Harry, his wife Meghan and the monarch’s disgraced son Prince Andrew — who won’t join the Queen on the Buckingham Palace balcony.

CNN attended a media briefing at the palace on Friday to hear all the details. The celebrations have been eagerly awaited by royal fans worldwide, but we haven’t had a full picture of how they’ll unfold until now.

It’s a jam-packed schedule of events to mark the Queen’s 70th year on the throne — but the agenda has been surrounded by uncertainty about the monarch’s health and questions about whether the Sussexes or Prince Andrew will attend.

We got some clarity on those issues, plus plenty of juicy details about the four-day royal extravaganza.

Here’s everything we found out about the big day(s).

Harry, Meghan and Prince Andrew won’t be on the balcony.

Several members of the royal family will make an appearance on the famous Buckingham Palace balcony during the Trooping the Colour parade, which kicks off the celebration on the morning of Thursday, June 2.

But only royals carrying out official duties will be included, a royal spokesperson told CNN.

That means Prince Harry and Meghan, Duchess of Sussex won’t be present. The couple split from the royal family in 2020 and no longer take part in royal duties. It’s been a burning question whether they’ll fly to the UK for the events.

It also rules out Prince Andrew, who was stripped of royal duties and his HRH title in the wake of his civil sexual assault lawsuit. Andrew settled that suit out of court earlier this year, but his lengthy association with convicted pedophile Jeffrey Epstein has tarnished his reputation and his involvement in the weekend posed awkward questions for organizers.

The Queen will be joined by her three other children, Charles, Edward and Anne, the spokesperson said. Prince William and Kate are also expected with their children, alongside a number of the Queen’s other relatives.

This doesn’t mean Harry, Meghan or Andrew won’t be involved in the celebrations at all. The wider family is traditionally invited to church services, like the one set for St. Paul’s Cathedral on the Friday.

But it’s not clear whether Harry, Meghan and their children will be in the UK for the event. Harry has been caught up in a legal battle over whether he can pay for police protection, and has said they’re “unable to return to his home” without that security.

The couple did make a secret visit to Windsor Castle last month and met with the Queen.

Her Majesty is “looking forward” to the weekend and plans to take part in the celebrations, but “her presence will not be confirmed until much nearer the time or on the day itself,” a royal source told CNN.

The 96-year-old monarch has struggled with mobility problems in recent weeks and has been forced to miss several public appearances, including this month’s Buckingham Palace garden parties (more on that later…)

She’ll continue to play it safe for the jubilee and hasn’t confirmed whether she’ll be present at the various festivities.

It may be up to her family to represent her again, as they’ve been doing during recent engagements. Not getting a glimpse of the monarch may disappoint some of the fans in attendance, but it’s become a reality that the nonagenarian Queen has slimmed down her schedule.

A party at the palace.

We already knew that a concert was planned for outside Buckingham Palace, following the jubilee tradition of hosting some big music stars on an impressive stage near the building.

But now we know what that stage will look like — and it’ll be quite something.

The BBC has released an impression of the staging and it’s also been announced that 22,000 people will be able to attend. That includes 5,000 tickets reserved for key workers.

Ten years ago, the Queen watched from a royal box and made an appearance on stage as stars like Paul McCartney, Elton John and Stevie Wonder sang for the monarch.

We don’t yet know who will be performing this time around, but we’ll keep you updated as we hear.

A flypast, a golden coach ride and a day at the races.

A whole lot more is planned for the four-day weekend. It’s been confirmed that a Royal Air Force flypast will take place while the royals are waving to supporters on the Buckingham Palace balcony, a fitting climax to the Trooping the Colour ceremony.

Then, on Saturday, the racecourse at Epsom will stage the 243rd edition of its famous horse race, the Derby. The Queen, a keen horse breeder herself, has been a regular spectator at the event and has presented the famous trophy in the past.

On Sunday, streets across the UK will stage their own jubilee lunches. The palace said 60,000 people have registered so far.

And back in London, the weekend will be capped with the Platinum Jubilee Pageant on Sunday. It will feature a reappearance of the Gold State Coach, which has been used at major royal events since it was built in 1762.

The Queen rode in the coach during her jubilees in 1977 and 2002, but this time she won’t be inside — instead, film footage of the monarch during her coronation in 1952 will be played in the windows.

And there are more announcements to come between now and June 2. Keep your eyes on Royal News for all the details in the coming weeks.

IN THE ROYAL DIARY

The Queen won’t attend her traditional summer garden parties at Buckingham Palace this year, another series of events the monarch is skipping as she suffers mobility problems.

Three events will take place in the grounds of the palace on May 11, 18 and 25, with a fourth in late June at Holyroodhouse in Scotland, it was announced on Thursday. Because of the pandemic, this will be the first time the parties have been held since 2019.

The 96-year-old Queen will be represented at the parties by other members of the family, though the palace hasn’t yet confirmed which royals will attend.

Elizabeth has been forced to miss a number of events this year, including an Easter service last month.

The garden parties are a big part of the royal calendar, giving the monarch and her family the chance to meet with thousands of community leaders and celebrate their work.

But they do require long periods of standing and walking, and these are the kind of events that the Queen has had to skip in the past few months. She also hinted that she was left “exhausted” by Covid after catching the virus in February.

The Queen could still make it to next week’s state opening of Parliament, a ceremonial event in which the monarch unveils the government’s legislative agenda.

WHAT ELSE IS HAPPENING?

Netflix has dropped Meghan, Duchess of Sussex’s planned animated series “Pearl,” PA Media reported. The show was set to be produced in collaboration with Meghan and Prince Harry’s studio, Archewell Productions, but the streaming giant is understood to have dropped it as it cuts costs. According to a press release last year, “Pearl” was set to focus on the adventures of a 12-year-old girl, who is “inspired by a variety of influential women from history.” Netflix lost 200,000 subscribers in the first quarter of this year and lost $50 billion in share value last month after those figures were announced. It has other projects from Harry and Meghan still in the pipeline, including a “Heart of Invictus” documentary that tracks participants in the sporting tournament Harry founded.

A new image of Princess Charlotte has been released to mark the young royal’s 7th birthday. The shot, which shows a smiling Charlotte relaxing in a field of bluebells, was taken by her mother in Norfolk, eastern England last weekend, according to the family. Charlotte is William and Kate’s second child, and fourth in line to the throne — just after her older brother, George, who turns 9 in July.

Prince William said society is “not really tackling the problem” of male suicide “as fast as we need to,” PA Media reported. During a visit to London mental health charity James’ Place, William asked workers how they get the message across to men that “some support is necessary.” The prince has long been an advocate for mental health causes. In a 2019 BBC documentary, he said he felt “pain like no other” after his mother, Princess Diana, died. “Particularly in Britain … we are nervous about our emotions. We’re a bit embarrassed at times,” he added.

Prince Charles has hailed international military alliances and said the war in Ukraine shows there is “no substitute for credible defense.”

Speaking while attending a parade of Royal Air Force aviators, Charles said he was “shocked by the images” of Russia’s invasion of Ukraine, adding that “the return of war to Europe” has “highlighted the importance of alliances.”

His comments represent a show of support for Britain’s military and in the NATO alliance from the heir, who has spoken on several occasions about the effects of the war.

In his Easter message last month, he said he “found (himself) heartbroken at the sufferings of the innocent victims of conflict or persecution” in recent years.

But he praised Britons who had applied to house Ukrainian refugees, saying: “It has been profoundly moving to see how so many people are ready to open their homes to those in need, and how they have offered their time and their resources to help those facing such soul-destroying sorrow and hardship.”

FROM THE ROYAL VAULT

The Queen is one of the most photographed women in history. But rarely in formal photo shoots do we see her smiling, natural and unposed.

When Buckingham Palace commissioned holographer Rob Munday to create the first official holographic portrait of Elizabeth in 2004, he snapped more than 8,000 pictures. That sitting produced a famous picture of the Queen, used on banknotes, postage stamps, and on the front cover of Time Magazine.

But it also included a more spontaneous shot, which sat unnoticed in his personal archives for almost 19 years.

The image shows a wry smile on the Queen’s face as she reacts to an amusing comment made by her friend and dresser, Angela Kelly, who was rearranging her clothing prior to the shoot.

Munday rediscovered it while under lockdown in France and is now displaying it to the public for the first time.

“I’ve completely forgotten about it. It’s lying on the hard drive for nearly 19 years.” Munday told CNN’s Robert Iddiols at the unveiling on London’s Park Lane. “But as I was thumbing through, right in the middle, there was just this one frame.”

The image was a happy accident, the result of test shots taken before the real thing.

“My first thought was that it would make a beautiful image to commemorate the Platinum Jubilee,” Munday said.

“I just loved it so much because it’s just a really, really natural portrait. I mean, a lot of people have told me that they’ve never seen a portrait quite like this of the Queen.”

PHOTO OF THE WEEK

Go long! Prince Charles tested his tight spiral while playing around with an American football this week, during a visit to Dexters Adventure Playground in Brixton, south London. 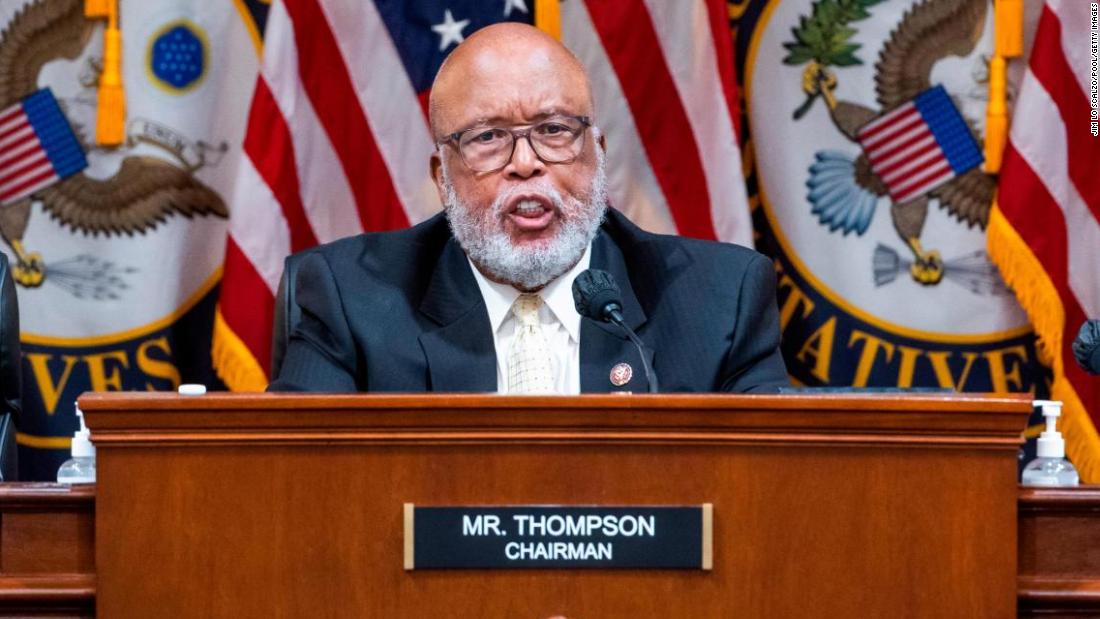 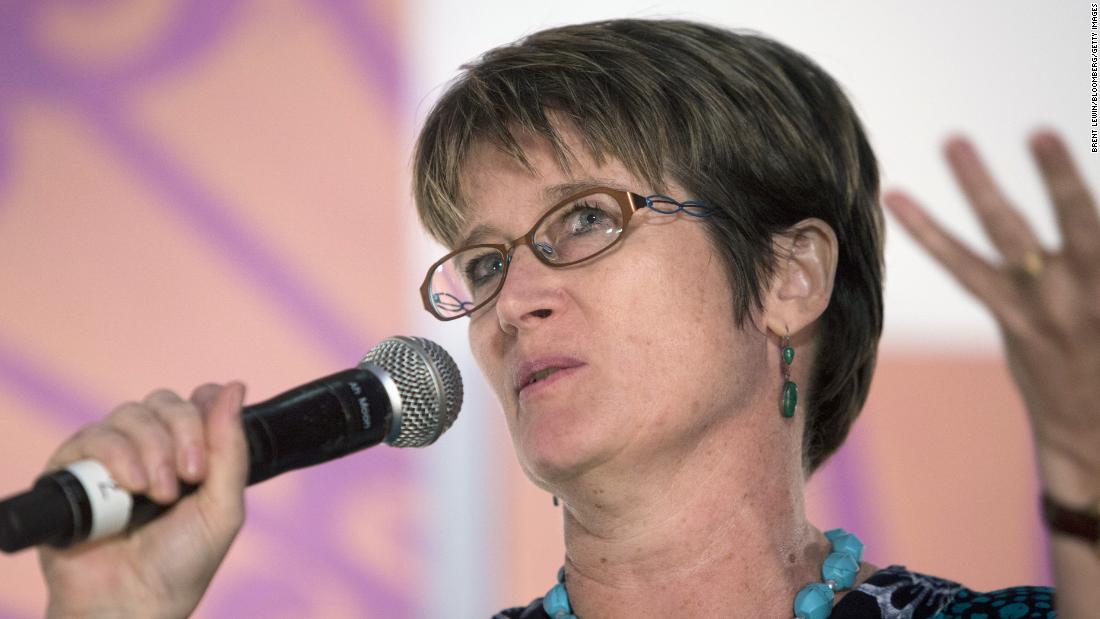 Myanmar junta sentences ex-British ambassador to one year in prison