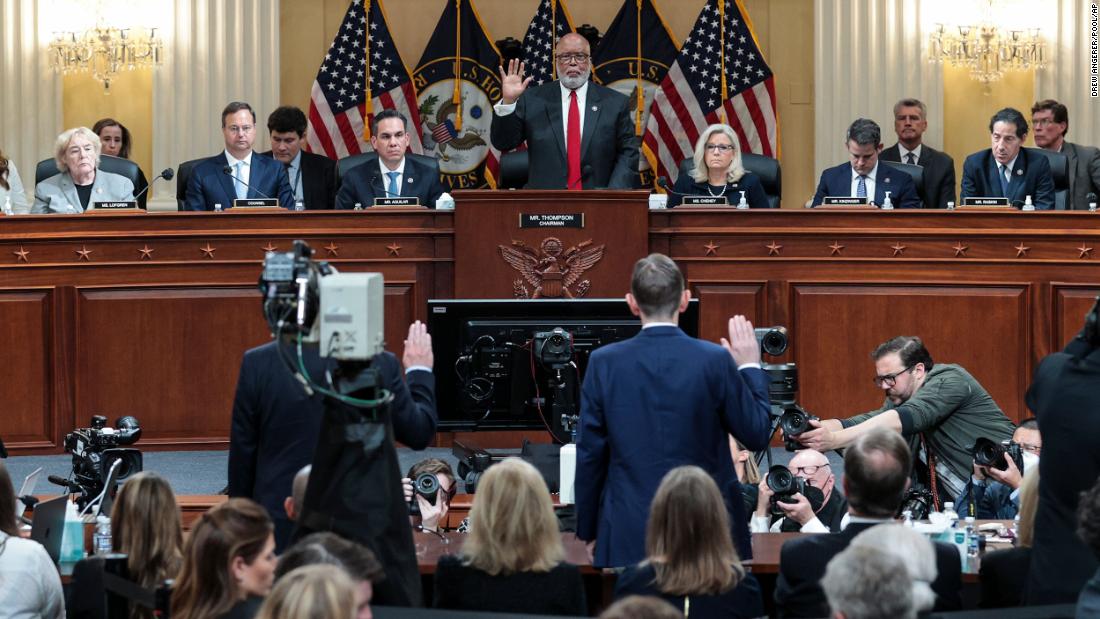 
The House select committee investigating the Jan. 6, 2021, attack on the US Capitol turns its attention Tuesday to the campaign to pressure state-level officials to overturn the 2020 election results.

The hearing will focus in particular on then-President Donald Trump’s efforts to overturn the results in Arizona and in Georgia — where Trump infamously asked Georgia Secretary of State Brad Raffensperger to “find” the votes he needed to win.

Committee aides said the witnesses testifying in person on Tuesday from Arizona and Georgia will be able to speak to the pressure campaign that came from the White House, as well as the backlash they received from Trump’s supporters.

The witnesses from Georgia include Raffensperger and his chief operating officer, Gabe Sterling, both of whom faced relentless attacks from Trump after certifying the state’s election. Fulton County election worker Wandrea ArShaye “Shaye” Moss, who was falsely accused by Trump of ballot fraud, will also testify about the backlash she faced.

Arizona House Speaker Rusty Bowers, a Republican, will testify about the pressure he received from Trump and Giuliani, according to committee aides.

Here are key things to watch for during today’s hearing:

The Meadows connection: Rep. Adam Schiff, the committee member who will lead Tuesday’s hearing, told the Los Angeles Times on Monday that the hearing would show how Trump’s former White House chief of staff Mark Meadows had played an “intimate role” in the efforts to pressure Georgia state legislators and election officials.

Committee aides said the hearing would “demonstrate his involvement” in Georgia in the run-up to Jan. 6.

Meadows reached out multiple times to Raffensperger after the 2020 election, according to text messages obtained by CNN, and he participated in Trump’s January 2021 call where the former President asked Raffensperger to “find” the votes the then-President needed to win.

While that call was going on, Meadows was texting with the deputy secretary of state, who urged him to end the call that now stands at the center of Fulton County’s investigation into whether any of the actions Trump or his allies took related to Georgia’s election were criminal.

Testimony from those who faced backlash from Trump’s attacks: The witnesses will be able to testify firsthand on Tuesday about the impact of Trump’s pressure campaign and false claims about the election — as they all were subjected to attacks and threats.

Aides said that Bowers, the Arizona secretary of state, will be able to testify about the “campaign of harassment” he was subjected to in the run-up to January 6 and the months that followed.

Raffensperger and Sterling were attacked by Trump and his allies for certifying Georgia’s election. Sterling warned in a December 2020 news conference that “it’s all gone too far” after local election officials had been subjected to threats and harassment.

Moss, who was a Fulton County election worker in 2020, will testify how her mother’s and her lives were upended and they were forced to go into hiding after Moss was accused by Trump of carrying out a fake ballot scheme, according to committee aides. She and another election worker sued Giuliani last year.

In her written testimony provided on Monday, Moss said the false stories accusing her of taking part in voter fraud had led to her receiving death threats.