General Health Latest News TOP STORIES
February 13, 2022February 13, 2022 admin 0 Comments europe, it has to convince the public - CNN, Ukraine Russia crisis: The West is a player in the Ukraine information war. Unlike Russia

In a world all too familiar with graphic images of one disaster after another, it’s easy to imagine the grim footage.

And the United States says that’s exactly what this is: make-believe violence. It says Russia is plotting to stage a fake attack, and shoot a gory propaganda video of it, as a pretext for an invasion of Ukraine. The clip would frame the Ukrainian military — and by extension, their NATO allies — for an attack on Russian-speaking people.

But while the US government declassified the information about the alleged plot last week, it didn’t share any of its underlying evidence with the public. In a heated briefing room exchange last week, journalists demanded proof to support the claim, with one reporter accusing the State Department of veering into “Alex Jones territory.”

“We are trying to deter the Russians from moving forward with this type of activity. That is why we are making it public,” Price said, before adding: “If you doubt the credibility of the US government, of the British government, of other governments, and want to find solace in information that the Russians are putting out, that is for you to do. “

The US claim came days after the British government warned of a Russian plot to install a pro-Kremlin leader in Ukraine, citing intelligence that it also declined to release publicly. Analysts said the developments showed the West was becoming more determined to take on Russia in the information war, a sphere in which the Kremlin has often had the upper hand in recent years.

But that is not without its risks.

It is one thing to try to deter potential disinformation campaigns, which are designed to give plausible deniability to leaders like Russian President Vladimir Putin. But it becomes another when a liberal democracy relies on unpublished intelligence to convince an already skeptical public of a looming threat.

News of the alleged false flag attack comes at a time of historically low levels of public trust in the US and British governments. As a result, there is more pressure for officials to lift the veil on their intelligence.

“During the Cold War, most people knew about the Soviet threat, and we did not need to provide evidence to show that was an issue,” said Dan Lomas, an intelligence and security studies lecturer at London’s Brunel University, explaining that in a “bipolar world the threat was pretty real to more people.”

Western intelligence agencies during the Cold War would “collect, analyze information, and then provide that to governments who will then use that to shape policy responses,” he said. That process is less straightforward in our current multipolar world. “Now we are getting into a world of multiple threats, the water has been muddied, and often evidence needs to be cited to justify policy actions taken” by liberal democracies, Lomas said.

Despite last Thursday’s heated briefing room exchange, four disinformation analysts CNN spoke to were adamant that declassifying intelligence of this sort was unprecedented for the US.

They said it also showed that democracies were finally taking pre-emptive action against the Kremlin’s disinformation playbook — which primed Russians for the 2014 invasion of Crimea and caught out NATO and its allies.

Russian Ambassador to the European Union Vladimir Chizhov told CNN last week that Moscow was not planning any false flag operations as a pretext to invade Ukraine.

But Russia is no stranger to such tactics. “In 2014, an actress claimed that a little boy had been crucified in the Donbas, and that was completely false,” said Nina Jankowicz, a disinformation expert and fellow at the Wilson Center, a non-partisan think tank. “It was debunked, but this story ran on Russian media and, to my knowledge, they still run with that story.”

Jankowicz told CNN that Russia had “handily misattributed footage from the Balkan wars that they claimed to be from South Ossetia and Abkhazia” during its five-day war with Georgia in 2008. She said “prebuttals” to Russian disinformation were a vital deterrent in an information war in which the West has largely been on the back foot.

But there are credible reasons for not revealing intelligence: doing so risks unmasking sources and divulging the methodologies employed to gather it.

Lomas said that in 1927 the British government read out diplomatic signals intelligence in Parliament to justify a raid on a Soviet trade delegation in London. “The Russians then knew that their communications were being read by the British government,” he explained. As a result, Russia changed its messaging system, impacting Britain’s ability to intercept Russian communications for years.

Yet journalists are understandably wary of reporting messages they are unable to verify independently — especially when the official narrative hasn’t always proved accurate.

Last August, when a Hellfire missile fired by a US drone struck a car in a Kabul compound, the Pentagon insisted that the dead were terrorists. An investigation later revealed that all those killed were civilians, among them seven children.

Past intelligence failures, like the “weapons of mass destruction” given as the rationale for the 2003 invasion of Iraq, continue to haunt public opinion of American and British interventions.

In 2013, the British government lost a parliamentary vote on joining US-led airstrikes in Syria despite intelligence linking Syrian government forces to a chemical weapons attack in Damascus. Polling at the time showed the majority of the British public opposed airstrikes. Ahead of the vote, then-Prime Minister David Cameron said: “One thing is indisputable: The well of public opinion was well and truly poisoned by the Iraq episode, and we need to understand the public skepticism.”

Nevertheless, there are ways to fix the credibility problem. Lomas suggests finding a better messenger.

When the British government alleged in January that Russia was looking to install a pro-Russian leader in Kyiv, the revelation came just as Prime Minister Boris Johnson was embroiled in a political crisis over alleged parties in Downing Street while the UK was under Covid-19 restrictions.

This meant that Britain’s release of sensitive intelligence was greeted with skepticism by some commentators, who wondered whether the hawkish tone was part of a strategy designed to help keep Johnson in power.

The debate over how to handle intelligence-based claims presented without evidence shows just how uneven the playing field is when dealing with autocracies such as Russia — which has long used the information space as an active front in its conflicts.

Most recently, Russia accused the search and rescue volunteer organization, the “White Helmets” group, in 2018 of chemical attacks linked to the Syrian regime — a Moscow ally. The group, celebrated internationally for their live-saving work in Syria, was a frequent target of pro-Kremlin disinformation sites, which sought to delegitimize their work by claiming they were terrorists or stooges of Western intelligence.

“All we have on our side is the truth,” said Jankowicz. “Russia is willing to create troll accounts and other false amplifiers, and play with the facts, and manipulate images.” “It is not fighting fire with fire in that regard,” she explained. “We’re always going to be a little bit less equipped to deal with this stuff.”

Since 2014, when pro-Russian rebels began seizing territory in eastern Ukraine, there has been a constant stream of disinformation about Ukraine.

None of the analysts CNN spoke to have seen evidence of the alleged Russian false flag operation revealed by the US last week — but none of them doubt the intelligence.

“What’s interesting is, starting in December, the Russians were the ones promoting the idea that this war would be started by a Ukrainian false flag,” Bret Schafer, a senior fellow at the German Marshall Fund’s Alliance for Securing Democracy, told CNN.

Schafer points to a statement made last December by Russian Defense Minister Sergei Shoigu who claimed that US mercenaries were helping Ukrainian special forces “for active hostilities” in eastern Ukraine.

According to a transcript shared on the government’s website, Shoigu alleged that supplies of an “unidentified chemical component” had been delivered to the region “to carry out provocations.” The US has denied the claim.

Shafer said Russian media sites ran with the claim, echoing a narrative already being pumped out on pro-Russian websites. “What is interesting is the Russians were the ones promoting the idea that the war would be started by a Ukrainian/US-NATO false flag,” he said. “It has been a sort of a back and forth of the two sides accusing the other of a false flag [operation].”

In recent years, the crackdown by social media companies on Russian bots has led to higher profile voices, such as news sites and personalities like Shoigu, playing a major role in the Kremlin’s drumbeat.

Analysis from Schafer’s team found that since November last year, Russian propagandists and news sites have claimed that: Ukraine is a failed state; Ukrainian politicians are neo-Nazis; US and NATO are to blame for the increasing likelihood of war and that — despite amassing more than 100,000 Russian troops near Ukraine’s borders — Russia is not the aggressor.

The UK-based Centre for Information Resilience, where Jankowicz is a senior adviser, has seen a 200% increase in posts claiming Ukraine is the aggressor against Russia compared to this time in 2021. Online narratives around Ukrainian neo-Nazis and NATO aggression have also seen a “huge spike in the past week,” she said.

And American media personalities have helped launder some of these talking points. In December, Fox News host Tucker Carlson reported that a “NATO takeover of Ukraine would compromise Russia’s access to its Sevastopol Naval Base.”

Jankowicz said the US is badly disadvantaged “because the issue of Russian disinformation [became] so polarized” in the Trump era, she said. “People hear the word Russia, and there’s a huge dose of distrust that comes along with that for certain parts of the political spectrum on … the far left and the far right.”

According to the State Department, the US government has taken an active role in debunking allegations on Ukraine as it tries to stop the Kremlin from shaping the information ecosystem to fit its policy goals.

Declassifying information as a weapon in the fight against disinformation worked in 2018 when the British government responded to the poisoning of Sergei and Yulia Skripal in Salisbury with the nerve agent Novichok. The then-Prime Minister Theresa May declassified evidence “extremely quickly while the situation was still unfolding, in order to push back against the Russian narrative,” Jankowicz said.

The details she released helped open source investigators like Bellingcat make bruising revelations about the poisoning suspects; they also cut through the hubris of the Russian government, Lomas said. The men accused of carrying out the attack were ridiculed abroad for claiming ​in an interview with the Kremlin-backed RT network that they had made the long journey from Moscow to Salisbury for a sightseeing day trip.

In the case of Russia’s alleged video plot, “there are plenty of reasons for the US public to be skeptical of US intelligence,” Schafer said.

US officials could try and mitigate that by pulling from the Salisbury playbook and releasing evidence later, he said. Alternatively, they could be frank that not providing proof “may not be good enough for a lot of people,” but explain that that they were unable to reveal any more.

But with the fog of war arguably thicker than ever in the digital age, cutting through may be hard to do. 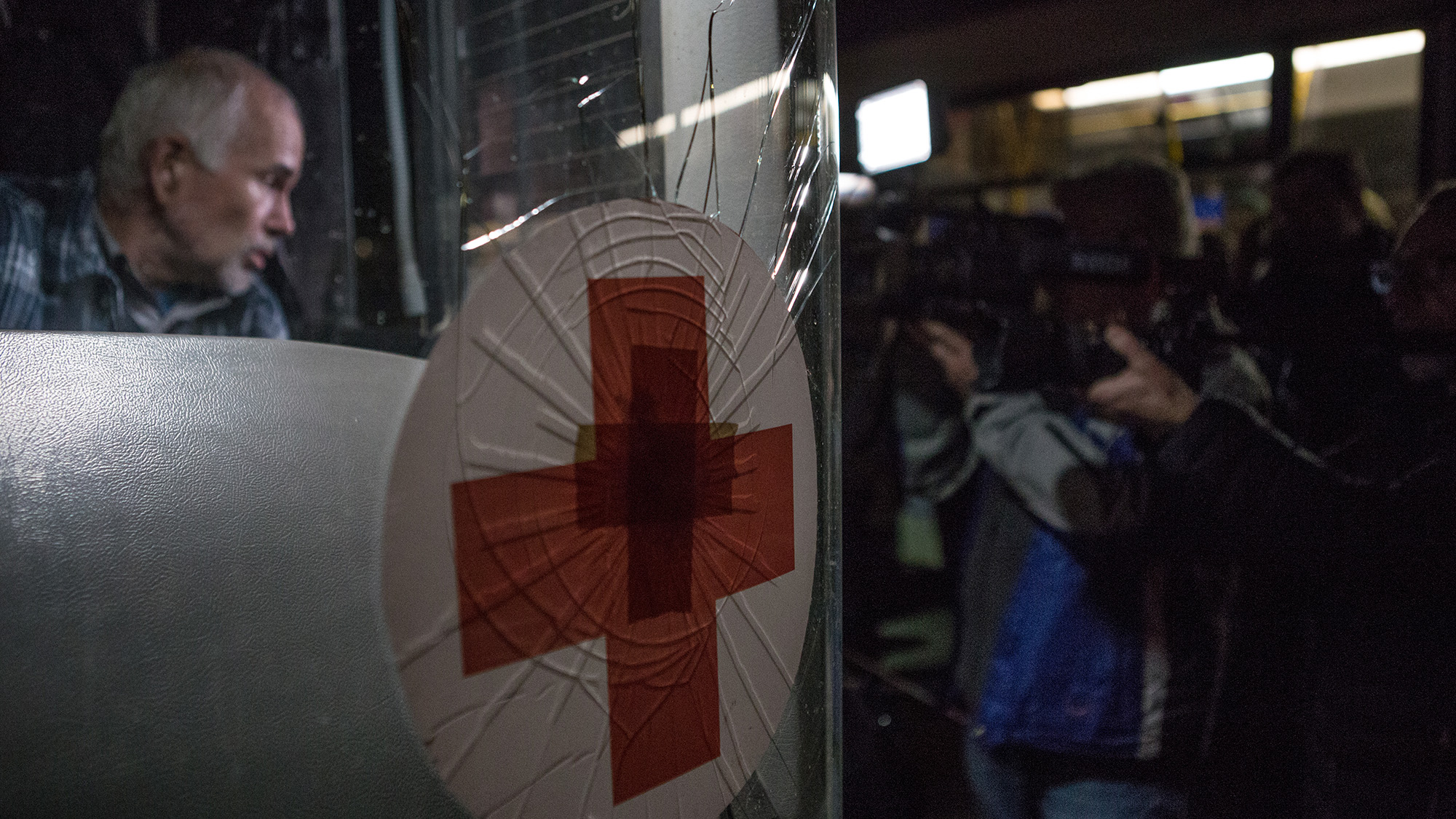 Harry Styles sets new Guinness World Record with ‘As It Was’